Do you need a Chief Persistency Officer? See if this scenario rings any bells. You’ve had a great first meeting with a client and they seem really keen to do business with you but when you follow up they say they can’t do anything right now, call back in 6 months. But 6 months later you hear they have started to do business with a competitor. This sort of thing happens all the time. You might even have submitted a proposal but then everything goes quiet. This is where the need for persistence comes in.

If at first you don’t succeed

A company I work with designs and produces bottling lines for drinks manufacturers. When we first met them, they thought they were great sales people but the truth was they had such a good product that they were more like order takers, at best they were making features and functions sales.

We made a presentation to them and they acknowledged the benefits sales training would deliver but it wasn’t really very high on their list of priorities. That was in 2007. In 2009 following a global economic downturn their turnover plummeted – now they were interested in improving sales performance!

I had tried to stay in touch with the Head of Global Sales, but he didn’t return my calls. His deputy, however, did and I stayed in touch with her over the 2 years. We didn’t get handed the work on a plate, there was a competitive pitch against 4 other suppliers. But because we knew about the pitch early on we were able to influence the way it was run and in 2010 we won a very valuable piece of business against much bigger competitors.

Persistence doesn’t mean wasting your time chasing business you will never win. It’s important to qualify leads in the first place and to update that qualification regularly – to identify where your proposal is on what I call the prospects ‘Urgency Radar’. This can change at any time. Sometimes you can walk out of a meeting with your proposal at the top of the customer’s agenda, they really mean it when they say they will get back to you but then something happens and things have changed within a day or even an hour.

For instance, one of our clients wanted to implement an Account Development Program this year that would have given them a good Return on Investment (ROI) but over the long term. Then they lost a big deal with a short-term impact and so the project was postponed because they had no funds for something with just a long-term impact. We had to rethink our offering to get back on their Urgency Radar.

Persistence as part of the sales culture

The problem with persistence is that it isn’t sexy and it’s hard work. Done poorly it is seen by customers as pestering. But done professionally persistence can become a key differentiator.

One of my clients is a technical leader in their field and they run regular open days. They invite everyone including the press, suppliers, existing customers and of course prospective customers. All the people who attend have the opportunity to learn about the company, new products and success stories - but there is also plenty of scope for networking and for Sales People to reconnect with prospects.

Other companies sponsor sporting or cultural events and use them as networking events so they can talk to prospects that have gone a little cool.

5 tips for the persistent Sales Person

Sometimes you can run up against a block. It might be that you have called a person several times but they have failed to get back to you. If you suspect this is happening try getting another member of the team to call, maybe as a direct follow up or about something related just to overcome the block.

Another situation is when an individual may not be in favour of your solution and is trying to put you off. If you are certain that you are never going to get a result by talking to this individual what have you got to lose if you go around them and talk to someone else?

Persistence is not easy and it may not seem as cool as going after new prospects or participating in pitches. But a well-qualified lead where you have already made some progress is more likely to convert than a totally new one.

Score yourself against 20 Success Factors with our B2B Selling Health Check: 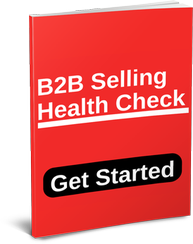